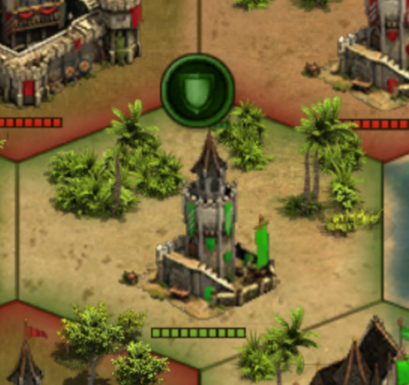 No matter how many sectors fighters secure on the GvG maps, if there aren’t troops to drop in for Defense Armies (DAs), there’s not much reason taking land if your intention is to hang on to it. As is with most things in this game, balance is necessary. While fighters provide some awesome force and aggression, those who farm troops and provide DAs provide the defense and back-up that fighters need to keep going. One simply cannot exist without the other.

The DA is what another guild trying to steal the sector is going to have to face, so the stronger, the better! With the exception of the All Ages map, the DA troops will have to match the era of the map you’re placing them in. So for example, if the sector requiring DAs is in the Colonial Age map, then you must use Colonial Age troops.

Troops that are placed for DAs will be left behind in the sector, forever. You will lose them from your troop inventory, so make sure that they’re troops you’re okay with giving up. If they are attached troops, you can rebuild them in the barracks, but otherwise it’s as if they died and you did not pay to revive them. They’ve gone to a good cause, but never short yourself to defend a sector.

Good troop composition is also essential. Not just for the single army, but for the group of DAs as a whole. Each sector will hold 8 DAs, the first one being created from the siege army used to acquire the sector. Having no more than two DAs of identical armies is ideal, because with variety the enemy that is attacking your sectors will have to work a bit harder to take them out. They won’t be able to just use one army themselves to take you on, they’ll likely have to surrender certain battles to keep their troops from being slaughtered too badly, lest they not have the fighting power to take the sector from you. In addition, you want to try and make DAs that are difficult to battle, based on the composition of troops in each DA.

The general rule of thumb is to never use more than two rogues in any one DA, and you don’t want to use a drummer or color guard outside of Iron Age. Looking at which battles are the most difficult to fight in Guild Expedition or on the Continent Map is a great way to get ideas for good DA troop composition to put up for any potential enemy to have to contend with. Especially since the troops change with the eras, so some compositions are more effective in one era than another.

Once you have troops to place in a DA, the second part is actually placing them. First things first, you have to either be on a PC, or if you’re working on mobile you’ll need to use the Puffin App (it’s clunky, but possible).

To enter the GvG map, click on the bottom far-right button. 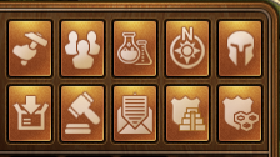 You’ll see the whole GvG map appear, and you’ll want to enter the era where DAs are needed. Don’t worry, it will automatically load you to where your HQ is, so you’ll see all the sectors you own in green. Hovering over sectors will give you the coordinates.

You’re probably looking for a sector with a bouncing green shield over it, like this: 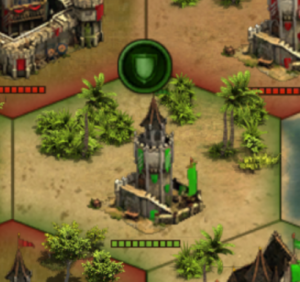 Once you find the sector that needs DAs, easily spotted because those little green pips at the bottom will have some red, you’ll want to click on the sector. A menu will appear, and you click on “View Sector”. Once in, you’ll see the following screen: 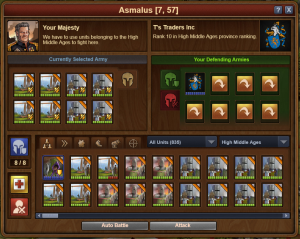 Go ahead and select the army you want to place as a DA, and then hit the magic golden arrow. Congratulations, you have placed a DA in the sector. Once all eight DAs have been placed, there will be no more arrows.

On the chance a guild attacks and damages a DA, but the siege is broken before they steal the sector, you can replace the damaged DA in the same fashion. You follow the steps as outlined here, but instead of clicking on the magic golden arrow, you click on the suffering damaged DA instead. It will ask if you want to replace, and the answer is yes.

Potentially your guild will have nuances to what they want, or when and where they want DAs, so check for those before placing anything. Just like everything else in the game, there are many little nuances, so this is meant to just cover the absolute basics. 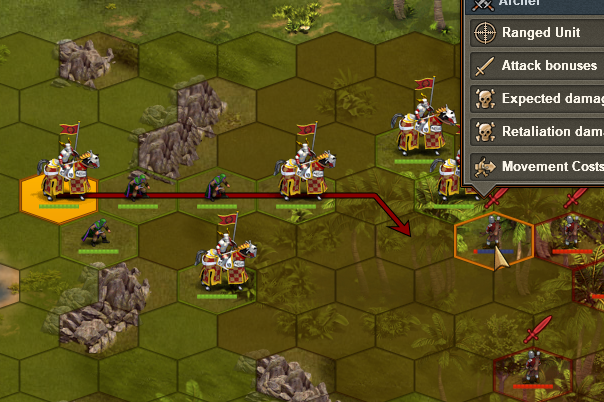 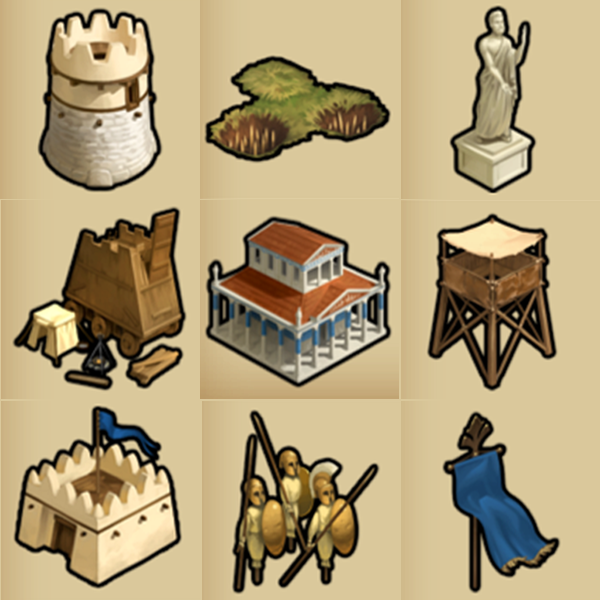