There are many milestones in the game, but a big one is entering the Modern Era (ME). By now you’ve already experienced two-lane roads, and you know that the way troops behave has updated. New to ME though, is the process of refining goods. Now, for the first time, it costs more than just coins and supplies to run goods buildings, it costs earlier-age goods too. For many, this is a daunting thought, and it can be confusing at first, too. Hopefully this article can help clear up some of the mystery surrounding refined goods, so you don’t have to make a mountain out of a molehill. 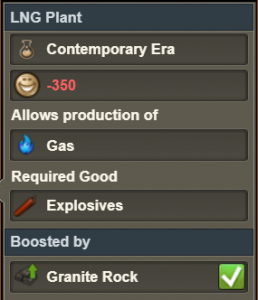 When you hover over the goods buildings for ME and beyond, they’re going to look a little different. Unlike earlier eras, there’s the extra line-item of what good is required to make the refined good. In addition, in some cases, the building itself may affect your citizens’ happiness, either for better or worse.

Looking at this image, we can see each of the line items clearly. 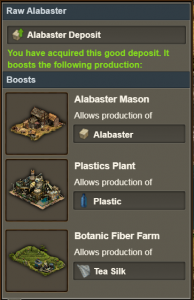 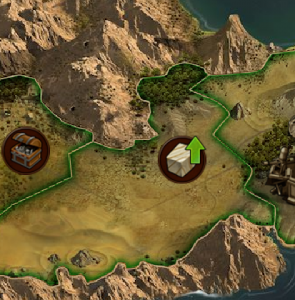 One of the other things that is going to change come ME is what you find on the continent map (c-map). Previously, you’d find deposits for the goods you could make of that era. Now you’re going to find deposits for goods of previous eras. For example, you might not have had the Alabaster Deposit in EMA, but now that you’re in ME or beyond, you may find it on the c-map here. This means you could make alabaster now, and you also have the correct deposit to make a couple other refined goods, too. Hovering over it on the c-map gives you all this information, which is pretty spiffy because it can help you to plan ahead; if you’re into that sort of thing, anyways. So looking at the alabaster as an example, we can see that not only is it the boost needed to make Plastic in CE (but it’s not the unrefined good needed, just the boost), it will also be the boost needed to make Tea Silk in VF (Virtual Future). 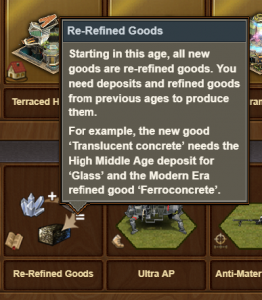 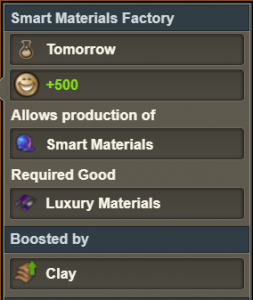 For Modern (ME), Post Modern (PME), and Contemporary (CE); you’re going to be making refined goods if you choose to put up goods buildings. Once you move into Tomorrow (TE) and beyond that, it changes to Re-Refined Goods. This is because now you’re going to need goods you’ve already refined (so something from ME or above) to make the new goods of your era. You refined that good once to make an ME, PME, or CE good; and now you’re going to refine it again to make your next good in TE, FE, AF, etc. It’s a process. You can see in this example image that the good Smart Materials from TE is going to need the good Luxury Materials from ME, and to make Luxury Materials it takes Porcelain from CA. So now instead of pure equivalence, you need 5 Porcelain to make 5 Luxury Materials which can then make 5 Smart Materials. Starting to get costly! This is why some users prefer “fair” trade calculators over just doing the 2:1, 1:1, or 1:2 ratios for goods, but the reality is you don’t have to necessarily make each step of material to get what you need for refining and re-refining.

You see, once you hit ME your GBs that make goods will start to produce unrefined goods of the era you need to work with your current-era goods buildings. So in ME, your GBs are going to produce CA goods, which are required to make the ME goods. As you age up, so does the age of the goods you’re going to get. This is one way to help mitigate that cost, especially if you’ve really leveled up those GBs to be getting a lot of goods from them. More than that, where your GBs were making, for example, 12 goods a day refined, they’ll now make 24 goods a day unrefined. That’s right, the output will double! Don’t forget too, your goods are worth more, so you can trade down for a lot. If you spend five porcelain to make five luxury materials, you can then trade those five luxury materials down to PE to be ten PE goods, then trade those down to be twenty IE goods, and trade them one more time to be fourty CA goods. So your five spent nets you a gain of thirty-five, and you can just keep doing this. Pretty sustainable, right?

Beyond even that, Inno has introduced into the game new buildings that help make refined goods.  From GE you can win a Tribal Square (TS) or a Terrace Farm (TF), and then from events you can win things like Sleigh Builders. They’re not a perfect solution, but they are an option. Some even make it so they don’t have to build goods buildings because they work these specialty buildings so well.

Lets look at the pros and cons of the three buildings here: Tribal Squares, Terrace Farms, and Event Buildings 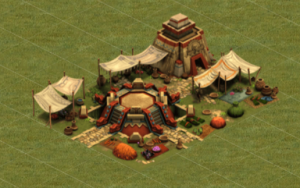 Pros: Produces refined goods, Gives population, Cannot be plundered if motivated
Cons: Has to be motivated to give goods, You need happiness to support the population boost 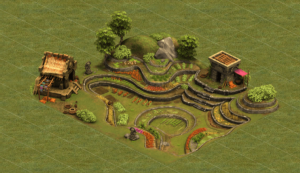 These are a 5×6 building that have production options. You can choose between producing coins, supplies, medals, goods, or forge points. Most players will use these to make five FPs a day, but you can use them to make ten goods (two of each for the era) every eight hours. The era of goods they make depends on the era of the building itself, just like the Tribal Square. Unlike the Tribal Square, this one costs population to put in, and the cost goes up based on the era. Since most use them for FPs though, they tend to just keep the lowest-era ones in their city.

Pros: Doesn’t have to be motivated to give goods
Cons: Very large for a goods producer, Can be plundered 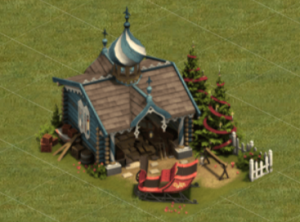 The Sleigh Builder is an example of an event building that will produce goods based on the era of the building itself. These buildings range in how they work, where some of them are like the Terrace Farm and need you to select an option, and some just produce automatically. Some are set buildings, and will only produce if you have the whole set, or they’re something that comes about from an upgrade. There are many, many parameters that affect these, and they come in all different shapes and sizes. However, it’s usually worth it if either A) they’re a small footprint and/or B) they produce other good stuff.

Pros: Usually produce more than just goods
Cons: If you’re using them strictly for current-age goods, you’re a slave to having enough one-up or renovation kits, Some can be plundered

Let’s pause for the cause and talk about the dilemma of current age goods and not using goods buildings. Tribal Squares are great here, because so long as you’re avid with GE and getting through at least all 48 (and not flying through the eras too fast), you’re bound to win one or more. Same with Terrace Farms. So in theory, you won’t need to use a renovation kit or a one up kit on these buildings, you can just replace them. This is good, because reno kits and one up kits are not easy to come by, either. Event buildings on the other hand are usually rare gems (very, very few make it into the Daily Challenge as a prize you might win) that you cannot get again. Therefore, if you want to bring them to your current era for better benefits, you need those reno kits and/or one up kits. Since these are hard to come by, you really need to think about it.

However, leaving buildings in a lower era to produce those goods isn’t necessarily a bad thing either. Helps round-out your inventory and help your mates potentially, should the need arise. So long as you’re making enough of your current era to keep going, all is well.

Don’t forget about questing, either. Questing can be a great way to earn goods of your current era, if you are able to loop them enough.

So, you have options when it comes to how you’ll obtain your refined goods. Either you can refine them yourself, or you can use buildings that already produce refined goods, or a combo of these methods. It’s entirely up to you, your play style, and how you’ve set up your city.

Remember above how I said GBs would produce unrefined goods for you? Here’s a handy chart to know what you’re going to get in each era, including the lower eras just so you can see the shift:

There you have it. That’s the basics of what you need to know when it comes to producing those pesky refined goods, and a couple ways to get around it. Also some food-for-thought about what makes a “fair” trade, and why user-created (not Inno-created) calculators maybe aren’t as fair as they claim: it’s really not that difficult to refine goods, nor to get your hands on refined goods. Not everyone will agree with this of course, but with the addition of things from GE and events, plus trading down, it does change things. Something to consider.

Hopefully this has cleared up any confusion you have on the topic, but if not feel free to ask questions in the comments. 🙂 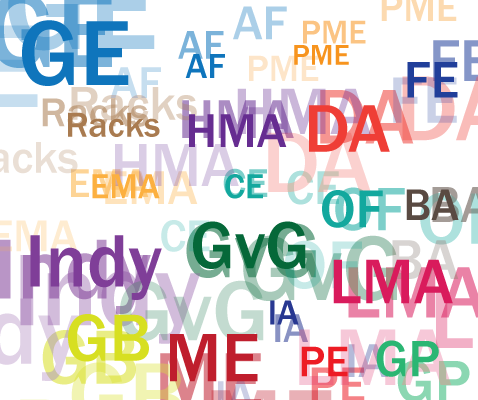